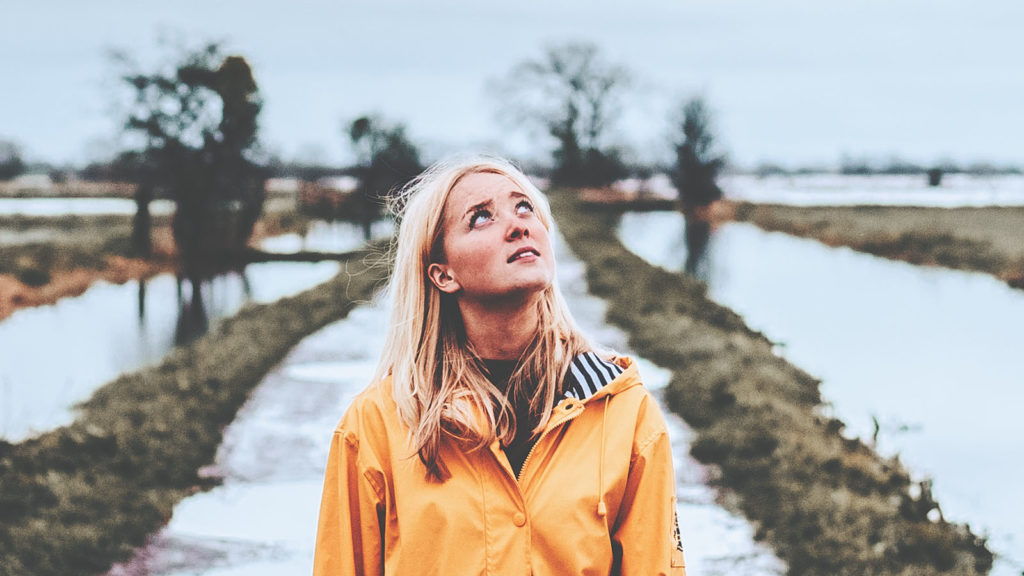 “Time and tide wait for no man”, so the saying goes. But ever since her EP, Tide & Time, came out in 2016, many have been waiting expectantly to hear Somerset singer songwriter Kitty Macfarlane’s debut album. On September 21 2018 the wait will be over as this fine young acoustic artist unveils the beguiling release Namer Of Clouds.

Produced by fellow musicians Sam Kelly and Jacob Stoney and released on Navigator Records, this is a captivating 11-track album featuring no less than nine of Kitty’s original songs.

Her sharply observed narrative songs are pure poetry, rich with visual imagery and written with an eco-eye – woven loosely together into a theme of mankind’s relationship with the wild. Gathering inspiration from the sky to the seabed, Kitty’s lyrics touch on intervention and rewilding, climate change and migration and one singular song which is a magical aural tapestry of woman’s historical relationship with textiles and the land.

The album is augmented by all kinds of ‘found sound’ recorded in locations from Somerset to Sardinia – birdsong, waterfalls, the click of knitting needles- and is bookended by sounds of the wild.

Recorded partly at The Cube near Truro in Cornwall and partly at Get Real Audio in Bath, Namer Of Clouds features not just the clear, confident voice and finger-picked guitar of Macfarlane but also the in-demand Radio 2 Folk Awards ‘Horizon’ award winner Sam Kelly on guitar, mandolin and harmony vocals, with some of his talented Lost Boys band members also on the roll call –Graham Coe on cello, Archie Churchill-Moss on melodeon and Jamie Francis, surprisingly not on his trademark banjo, but on electric guitar.

Co-producer Jacob Stoney is on keys, bass, mandolin and vocals, Tom Moore is on violin and viola and Josh Clark, who mixed and mastered the release, provides percussion.

It was evident some years ago that Macfarlane was one to watch. Hailing from Milverton in Somerset she played her inspired songs at local folk clubs from a young age. But her music was heard by a much bigger audience when in 2010 BBC Radio 4 featured her engaging Bus Song on its popular Excess Baggage travel show.

Presented by Sandy Toksvig, the show had invited its audience to nominate their favourite bus routes and selected Kitty’s brilliantly observational song which told of her journey home from Taunton on the 25B bus!

Kitty wove her emerging music career in with her English and French degree studies at Warwick University and, in 2015, was a semi-finalist in the BBC Young Folk Award. More recently she has supported Kathryn Roberts & Sean Lakeman on tour, as well as Blair Dunlop.

Now the Bristol-based performer is coming into her own with some remarkably mature songwriting, a marked empathy with the environment and a strong sense of place. Cerebral and classy, honest and immediate, these are not throwaway lyrics or everyday melodies but thought-provoking and evocative compositions with wonderfully crafted soundscapes.

This is an album that flows in an almost filmic way. Its cover shows Kitty on the flooded Somerset Levels of her home county and it is here on the Avalon Marshes – one of the largest lowland wetlands in Britain – that the arresting ‘other worldly’ opening song is set. Starling Song marvels at the balletic, hypnotic starling murmurations above the reed beds in winter. Sparse and suspenseful it swoops, wheels and whirls like the avians as a stark prelude to the album.

by Kitty Macfarlane
Available now on:
Back