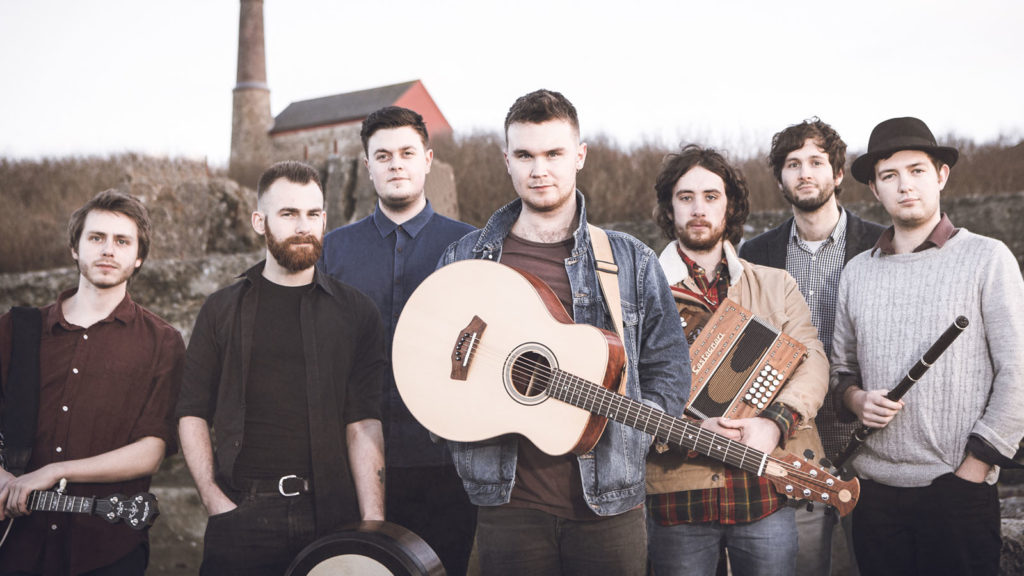 If you like your ‘folk’ edgy, turning traditional songs on their head, swerving into rock territory or nudging the mainstream, Sam Kelly’s your man. Just three years after releasing his first EP, Norfolk-born, Cornwall-based Kelly scooped the coveted 2016 BBC Radio 2 Folk Awards “Horizon” title, which recognises the best emerging talent.

His debut CD The Lost Boys was released in 2015 to wide acclaim (his version of Wayfaring Stranger even being heard on Channel 4 soap opera Hollyoaks!)

Kelly, who says he owes much of his musical inspiration to his late Irish grandfather, is known as a former Britain’s Got Talent finalist (“a massive whirlwind experience”) when he was just 19. It’s part of his colourful story but that story has moved on in leaps and bounds, making him one of the most exciting young performers on the circuit.

Playing guitars, bouzouki and mandolin he undoubtedly has instrumental prowess but it’s the effortless soft-edged, stand-out voice that has fast tracked him to the top tier of the scene whether in his trio with Francis and Carson, in Cornish band The Changing Room band or spearheading his own Lost Boys.

Trawling old songs and tunes for this innovative melting pot album, Kelly has found some gems to refashion kicking off with the rousing whaling shanty Greenland Whale which is matched at the other end of the 12-track album by a driving, full-blooded take on the trad English song The Keeper.

Giving the album its title, the Scottish ballad of a thwarted romance between a soldier and ‘pretty Peggy’ – Bonny Lass of Fyvie – has been recorded by a host of performers from Dylan to The Grateful Dead but here it is a given a beautiful kid gloves treatment enhanced by the talents of two of the biggest names in folk – the coffee and cream vocals of Cara Dillon and masterful pipe playing of Mike McGoldrick.

Keeping the Celtic flag flying the album also offers a gentle take on the trad Irish song If I were a Blackbird which breaks into a midway tune based on Chris Wood’s Ville De Quebec and features Ulster’s talented Damien O’Kane on electric tenor guitar.

Apparently written by Stephen Foster in 1850 for The Christy Minstrels, the Appalachian song Angeline the Baker laments the loss of a woman slave sold by her owner in a high energy treatment with Francis’s banjo – a hallmark of this album – leading the way and Geoff Lakeman on spoons duty!

Francis contributes his own arresting song about Scottish border raiders When the Reivers Call with frenetic banjo creating an unsettling scenario.

Just when you think you might have the measure of this album it throws a curve ball with the menacingly, dark tale The Shining Ship – based on the popular 17th century Scottish ballad Demon Lover. Tension builds through a brooding epic treatment of almost six minutes that crashes musical barriers and the mega decibels continue on the high-octane version of Dylan’s Crash on the Levee.

And this album is not without humour – the comedy card is The Close Shave, Bob Bickerton’s tale of mistaken identity in a New Zealand gold mining town (based on the trad song Barrack Street) while in Shy Guys Serve band members throw some excellent tunes into the mix – Josh’s Slip by Shaer and Rookery Lane by Algar.

It’s not hard to pick Kelly’s own Chasing Shadows (a message to anyone going through tough times) as a stand-out song on the album with its beautifully soaring instrumentation and a definite nod to mainstream.

The entrancing cyclic The Rose brings this diverse album to its conclusion. Sam played mandolin with Belgian band Naragonia in 2016 and has translated their song Le Beau Rosier into English. Hypnotic and strident it showcases the Lost Boys at their best, with its ebb and flow rhythms.

by Sam Kelly & The Lost Boys
Available now on:
Back